Our family attended the women's rights march in Asheville recently. There were thousands of people from all walks of life there, and it was moving to see so many standing together for a common cause(s). As I stood there reading all of the signs, the idea occurred to me to write about being "for" something or "against" something. I'm for all of the rights these people were marching for, but I'm not against the establishment that poses a threat to those. If you are against another group of people, you become like those who are against your group. You now have something in common -- you're both "againsters." It's quite possible to be for something and take action to support what you're for, without being against anything. You can fight negativity with negativity, but it's a never ending battle without winners, only victims.


There's the old saying, "What you resist persists." It may sound quaint, but it’s true. These things that bother us continue to nag at us until they are dealt with, not just externally but internally. What’s bothering you isn’t out there. It’s what’s in you. You’re projecting it out on the world. In that way, you shape the world you live in. If you want to shape it into a better place, then you need to find that better place inside you. You already have it, but it’s hidden under layers of judgment and conditioning. Those are the only obstacles to peace. Without those, peace can come through you into the world and shape it in ways you can never imagine. To be the peace that you already are, be at peace with what’s going on around you. That won’t change until you do. 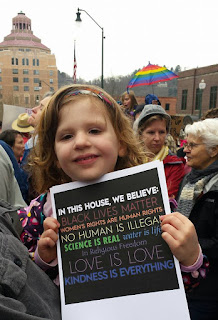 I was just clicking through.

Thanks, Bobby. Do you have a link to your blog?